The four mile segment of the Vegas Boulevard South that is known as the Strip, is one of the most rewarding places in the world to arrive by luxurious limousines. From the Fashion Show Mall, the largest shopping center on the Strip, to the world-famous resorts and casinos, the Strip is truly the best of Sin City and a destination that is popular among clients looking for a LA to Vegas limo ride. As the traffic here is particularly congested, maybe especially during weekends, the bumper-to-bumper traffic leaving L.A. and getting into Nevada can be a total headache. But it doesn’t necessarily need to be that way! Being chauffeured around the busy streets while partying in the back of limos can be the most awesome way to arrive in Sin City. While in the city, the local company Deuce offer double-decker buses to tour the Strip, the tram and the local bus system operated by the Regional Transportation Commission of Southern Nevada (RTC) are also other great ways of getting around. But when it comes down to entering the city on a Friday night of fun, there is no better way to arrive than by one of our Los Angeles to Las Vegas limousine rides, which is now offered with an exclusive best-price-guarantee for all our clients. Do you prefer flying? Check out our LAX sedan service for the best prices to-and-from any Southern California airport for your flight. 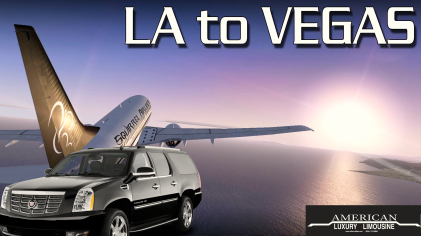 So, back to the Strip. Did you know this little stretch of Highway-51 was originally named the Strip as it resembled L.A.’s Sunset Strip? Former L.A. Police Captain Guy McAfee relocated to the city in 1938, and ever since he nicknamed the piece of the boulevard for the Strip, the named has been used by locals and visitors alike. Being one of the wonderlands of the city – along with the old Downtown region – the Strip is truly a remarkable place in a rather dry and boring desert-landscape. Surrounded by mountain-land, canyons and vast deserts, Sin City is as unique as anywhere. From clients ordering an exclusive Calabasas party bus to drink their way to Nevada – to clients booking our awarded LAX sedan service to fly to Nevada, American Luxury is your choice for LA to Vegas limo tour offers and similar package-tour options. From limo-buses for Hollywood nights out, to wedding services, bachelor- and bachelorette parties, and price-awarded Malibu wine tours – any experience with American Luxury Limos will be a memorable moment of luxury and top-notch experiences. Being the center of action in a city that for sure never sleeps, the Strip has steadily increased its way southward for at least 50-60 years. Whether you are a local in L.A., need a ride home to Southern Nevada, or you are a tourist visiting SoCal on the lookout for an excursion, – our Los Angeles to Las Vegas limousine services will be able to accommodate you and all of your needs and travel-companions. 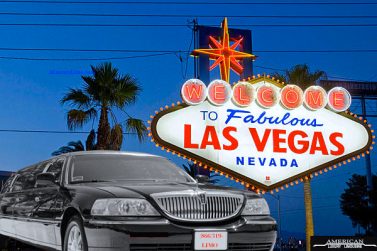 So what are some of the hottest locations and destinations on the Strip? With its major worldwide-recognized resorts, restaurants and casinos, many of these demand individual recognition and research, but let us represent to you some of our clientele’s favorite destinations in Sin City! Maybe the most popular destination ever for us has been the intersection of the Strip and Tropicana Ave., which boasts 5 of the largest resorts in the world, including the MGM Grand Hotel (3rd biggest resort in the world), the Excalibur (8th biggest resort in the world), the Luxor (5th biggest), while others are the Mandalay Bay, Delano, Four Seasons, and Monte Carlo on the Strip itself. But there are many more options in the City of Sin. We recently picked up numerous students for a Calabasas party bus rental that wanted to head straight for the Venetian, truly one of the city’s most spectacular resorts, bragging among other amenities its own waterway, the Grand Canal. Other highly popular destinations where include the Hoover Dam, the Natural History Museum, the Lied Discovery Children’s Museum, Lake Mead, Red Rock Canyon National Conservation Area, and various casinos, restaurants, hotels, shopping malls, as well as areas of natural beauty, and areas of significant historic value, as well as the many larger and famous galleries and museums spread throughout the larger city area.

So you just hit Vegas, why not step it up and go deluxe? If you are looking for riding in style, what better way than by an LA to Vegas limo trip? You will not only arrive in style at your final destination on the Strip, but also partying your way all through the boring desert highways crossing the state-borders. Preferring an excursion closer to home? Why not check out our award-winning Malibu wine tours transversing the gorgeous Malibu coastline as well as canyon-land. This is definitely the ultimate city that never sleeps, and with more than 300 days of sun, the Strip makes for an ultimate partygoers destination. Call us today to book your adventure!